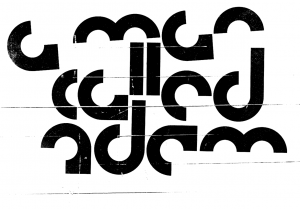 When it comes to relationships, very little lasts forever. Friendships fade, marriages end, collaborations dissolve. But rules were made to be broken—and one of the more beloved exceptions to that rule comes by way of musical partners Sally Rodgers and Steve Jones, the pair known to lovers of emotionally charged music as A Man Called Adam.

Sally and Steve first bonded over, among other things, a fondness of’60s soundtracks and composers—which would explain why they chose to name their duo after a 1966 Sammy Davis Jr. flick scored by jazz great Benny Carter. Some other shared loves include everything from the maddest avant-garde electroacoustic music to the best kind of pop (pop not pop as they describe it), with stops along the way for reggae, disco, electro, SoCal rock and so much more.

That kind of wide-ranging taste might explain why AMCA’s discography—brimming with cherished ’90s-era tracks like ‘Barefoot In the Head,’ ‘Techno Powers,’ ‘Easter Song,’ ‘Estelle’ and ‘Que Tal America?,’ many released on their own Other label—is so hard to pin down. Ranging from lilting downtempo material to groove-driven thumpers, the music is almost reflexively appealing—beyond its emotionality, it’s imbued with the kind of rich arrangements and earworm melodies that linger long after the song ends.

But really, the unifying feature of AMCA’s music is it drips with layers of feeling—from sorrow to joy, from intimacy to grandeur, often within a single tune. As Sally puts it, ‘If a track doesn’t have a “moment’” in it, like a wave breaking, where the emotion gets deeper and somehow reaches across the chasm to touch the listener, then it isn’t doing its job.’

It might seem as if AMCA have been quiet in recent years, but Sally and Steve have hardly been twiddling their thumbs. In recent times they have explored the experimental end of their practice as producers, DJs, educators, and sound designers, with commissions including works for the British Museum, the National Science Museum, BBC Radio 4, the British Music Experience, the Miraikan Museum, Tokyo, and their ongoing collaboration with video artist Milosh Luczynski. Sally’s a senior lecturer at Leeds College of Music; Steve’s expertise in the field of mobile music making has seen him collaborate with famed institutions such as IRCAM in Paris and the British Council, creating workshops and events based on his research.

And 2019 will see AMCA reentering the popular consciousness in a big way. Here’s a taste of what’s to come: A track produced with Balearic boss Leo Mas on Music for Dreams, selected soundworks on the Emotional Response label and—oh, the joy!— an all-new set of AMCA tracks to be released on Other. They’ll also be deejaying and performing live shows featuring classics from their catalogue, alongside their new material and experimental video work. It’s not as if Sally and Steve ever really left— but it’s great to have A Man Called Adam back.